Why Did T. Rex Have Such Tiny Arms? To Keep Them Out of the Way

by admin
in Lifestyle
0

Why Did T. Rex Have Such Tiny Arms? To Keep Them Out of the Way

For one of the most fearsome beasts to ever walk the earth, the Tyrannosaurus rex certainly gets made fun of a lot: Why did the T. rex have to close up shop? It was short handed. What do you call a T. rex that works in a casino? A small arms dealer. Why did the T. rex go extinct? He couldn’t embrace change.

The T. rex still reigns as one of the world’s all-time great predators. Stretching upwards of 40-feet-long and reaching 12-feet tall, the “King of the Tyrant Lizards” could weigh more than 8 tons. The apex predator could also exert up to six tons of pressure with one bite of their mighty jaws — the kind of force that could tear a car in half — and their mouth was filled with 60 serrated teeth. And yet, when faced with the skeleton of a T. Rex at a natural history museum, one question always seems to come up: “Why are their arms so small? How funny!”

Laughs aside, scientists have been trying to answer that question ever since the first full T. rex skeleton was dug up by dinosaur hunter Barnum Brown in 1904. Brown didn’t even believe the arms he found were part of the same animal. The mystery is an admittedly tricky one to unravel, given that T. rex last flailed its little arms some 68 million years ago (Jurassic Park and its myriad sequels aside).   Still, that hasn’t stopped scientists from trying to suss out their evolutionary benefits. In other words, what might they have been good for? Kevin Padian, a paleontologist at the University of California, Berkeley, suggests that T. rex’s arms were originally longer, but shortened over time to prevent accidental or intentional amputation, according to a paper published in the journal Acta Palaeontologica Polonica in March. That way, when a pack of T. rex’s descended on a carcass to feed with their massive heads and powerful jaws, they wouldn’t cut off their own forelimbs in the process.

If there was a fresh kill and several adult T. rex’s swarmed around it, perhaps using their massive heads to tear and shred, Padian theorizes that it wouldn’t be advantageous to have loose limbs that might be torn into, as well. Severe bite wounds could cause infection, hemorrhaging, shock and even death. Padian hypothesizes that natural selection favored shortened forelimbs, since the arms were of little use to the carnivores in the first place.    Theories about the uses of the T. rex’s arms have been bandied about for decades — in large part because they are truly, mystifyingly weird. For example, a 45-foot tall T. rex has arms that are around three-feet long; the equivalent of a 6-foot human with 5-inch arms. Stranger still, the puny arms are nonetheless quite powerful: Analyses have shown a T. rex’s arm could bench press 400 pounds. And yet, despite this raw strength, the arms were not only short, but possessed a limited range of movement, as well, only capable of swinging across at an angle of about 45 degrees.   One theory proposed was that the forelimbs were used to grab and hold onto females during mating. That’s what Barnum Brown initially thought. (Females, however, also have the same limbs. Beyond that, the arms are very close to the body, so it’s unclear how they’d be effective in holding another large animal in place is.) Another theory is that the arms were used as a lever for T. rex to lift itself off the ground if it had fallen over. Or, perhaps, they slept in such a way that they’d be used to hoist themselves back up.     Some scientists argue that the arms were used to clutch squirming prey before they were dispatched. Steven Stanley, a paleontologist at the University of Hawai’i at Manoa, theorizes that the arms were used to slash prey at close proximity, as the predator’s crescent-shaped talons that could be used to inflict mortal wounds on prey. Others have long held that they’re vestigial; an evolutionary holdover from T. rex’s ancestors. The arms were simply no longer necessary, like the wings of today’s flightless birds, such as ostriches and emus. 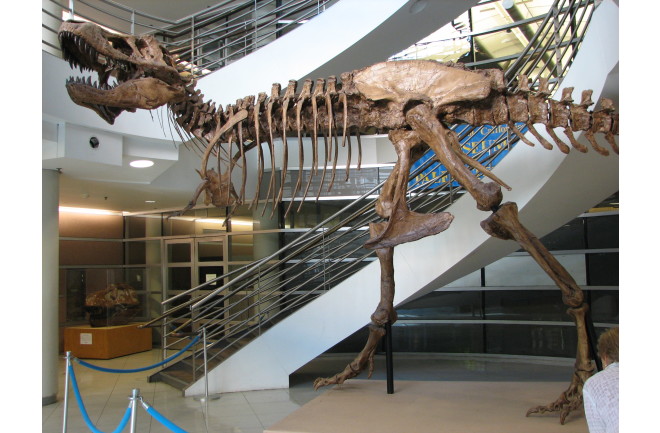 Padian measured the lifesize T. rex cast that towers over the atrium at the University of California Museum of Paleontology at UC Berkeley to test theories about the predator’s forelimbs. (Credit: EncycloPetey/Wikimedia Commons)

Padian examines many of these theories and speculations in his new paper, finding that most don’t appear to have been fully tested. For example, the hypothesis that T. rex could have bench pressed about 400 pounds doesn’t take into account that it couldn’t have gotten close enough to anything to actually pick it up. “All of the ideas that have been put forward about this are either untested or impossible because they can’t work,” Padian said in a press release. “And none of the hypotheses explain why the arms would get smaller — the best they could do is explain why they would maintain the small size. And in every case, all of the proposed functions would have been much more effective if the arms had not been reduced.”   Other ideas will certainly surface over time as to why the mighty dinosaur’s arms are ridiculously small — but, as Padian notes, the T. rex’s extinction means it will be difficult for scientists to ever prove conclusively. The definitive answer, then, might remain just barely out of reach.

Jekardah Nightlife Offers Many Hotspots for People with Alternative Lifestyles

Rigid Packaging Should Be Unique According To Market Trends In 2022